The Question of Bacteria in Processed Pet Foods

Harmful bacteria reside in not just raw meat, but processed food as well 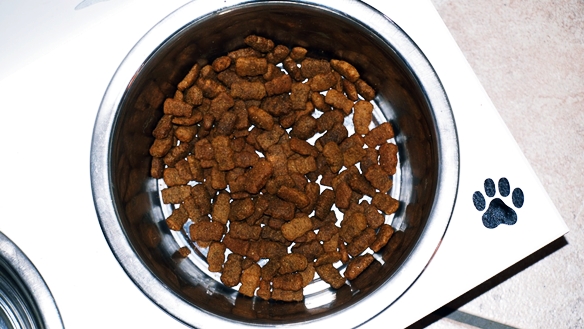 The purpose of this article is to show people, who are worried about bacteria in raw food, that there is a similar concern with processed food.  This article is public domain and has been cross-posted on many BARF lists.  The author is Donald R. Strombeck DVM, PhD, and is an excerpt from Home Prepared Dog & Cat Diets, The Healthful Alternative.

Bacteria and other microorganisms contaminate processed pet foods and can be responsible for digestive tract diseases. The bacteria found consist of microorganisms associated with food ingredients, acquired during handling and processing, surviving any preservation treatment, and contaminating food in storage. Most pet foods are exposed to many potential sources of microorganisms. They include sources of contamination during production, harvest, handling, processing, storage, distribution or preparation for consumption.   Contamination can be by bacteria in soil, water, air, living plants, feed or fertilizer, animals, human beings, sewage, processing equipment, ingredients and packaging materials.

There is great concern today about food wholesomeness. A focus of this concern is contamination of animal-food sources by disease-causing bacteria. The quality of pet food ingredients is poorer than those for human consumption. In addition, animal-protein consumption are ingredients for either pet foods or fertilizers.


Bacterial contamination of rejected food is likely because it is a common reason for rejection. To change this, it would require the industry to change the source of  ingredients for making pet foods.  A study was recently completed to determine the numbers and kinds of bacteria that could be cultured from many commercial dry pet foods.  It is surprising that all such foods are contaminated with bacteria. The numbers of bacteria may not affect most animals that consume a meal quickly.  It is predictable that dry foods will cause problems when some of the label feeding instructions are followed. On feeding puppies, one large pet food manufacturer recommends that during weaning, it is best to keep their moistened food available at all times, however, bacteria in moistened dry food multiply rapidly.

Different species of Salmonella are best documented as a bacterial cause of diarrhea in dogs. Salmonella can be cultured from the feces of up to 30% of dogs. Many are normal and show no signs of disease. Infection by Salmonella usually follows ingestion of contaminated food or water. The food is of animal origin or contaminated by foods of animal origin.  Salmonellae has been found in commercial pet foods, something the public never learns. A recent notice in the American Veterinary Medical Association journal reported that "The results of an FDA survey of vegetable and animal protein ingredients used in animal feed, presented at the recent US Animal Health Association meeting, show that nearly 57% of animal protein samples and 36% of the vegetable protein samples tested positive for Salmonella. In other data, more than 60% of animal processing plants and 37% of vegetable processing plants tested positive for Salmonella." Pet foods are cooked to kill Salmonella bacteria, but where the processing plant is contaminated, food is exposed to contamination after cooking. The chances of contamination with Salmonellae are so great that some companies routinely culture their final products. If contaminated, the batch of food is not sold for animal consumption. Unfortunately, the assumption is made that commercial pet foods are not significantly contaminated with other bacteria; manufacturers do not culture for others.
"The quality of pet food ingredients is poorer than those for human consumption. In addition, animal-protein consumption are ingredients for either pet foods or fertilizers."
Disease caused by foods contaminated with Staphylococcus aureus is the second most commonly identified form of food-borne bacterial disease and are most commonly found in contaminated meat. Once food is contaminated, the product can be cooked to destroy bacteria, but heating does not destroy toxins that have already been formed so that the food remains a source for gastrointestinal problems. Staphylococcus aures contamination can be prevented by using clean food sources.

Escherichia coli is found in the large intestine of normal animals, in a site where the bacteria cause no problems. Some of these organisms are not pathogenic. Others can invade the intestinal mucosa and the body, produce an enterotoxin, or produce an exotoxin that directly destroys the mucosa and causes diarrhea. Heating reduces Escherichia coli's ability to cause gastrointestinal upsets by killing the organism and destroying some toxins it produces. The bacteria also produce toxins that are resistant to heat. Escherichia coli in  food represents "fecal contamination," and that is more common for some ingredients in processed pet foods than in foods for human use. For example, meat meal found in many pet foods is prepared from dead animals contaminated with fecal types of bacteria (coliforms). This would make it important to feed pet foods made only from "wholesome" foods.
The diet affects endotoxin production. When non-digestible cellulose or hemicellulose fiber accumulates and ferments in the colon, aerobic bacteria increase 100 to 1000 times. Most pet foods have high concentrations of undigestible matter, thereby supporting aerobic bacterial growth better than other foods. In addition to using for minimizing the production and absorption of endotoxin in the digestive system, attention should be paid to reducing endotoxin levels in pet foods.

Contaminated meat meal is also likely to contaminate other ingredients, including the final product after cooking. Salmonellae sometimes contaminates the premises to the extent that some pet foods containing no Salmonella-tainted ingredients are contaminated before the products leave the factory. Manufacturers do not analyze processed pet foods for endotoxin, but it can be present. The fact that coliforms can be cultured from meat meal shows that it contains endotoxin. The pet food industry uses inexpensive sources of protein in order to produce an inexpensive product.  Thus, meat-meal protein continues to be used.

Coliform bacteria such as Escherichia coli have been isolated from meat products. This problem is solved by cooking meat for longer times and higher temperatures. Because Escherichia coli is a coliform, it is another source of endotoxin. Heat does not destroy endotoxin, and it can be a cause of illness. So Escherichia coli can produce disease by more than one means, with one still potent after thorough cooking.  Nothing can be done to decontaminate a food containing endotoxin."
All content and images on the NJBoxers.com Web Site are the copyright of NJBoxers.com unless otherwise specified.
Use of any content or images from the NJBoxers.com Web Site is not granted except by written permission.
All Rights Reserved 2000-2019 © NJBoxers.com