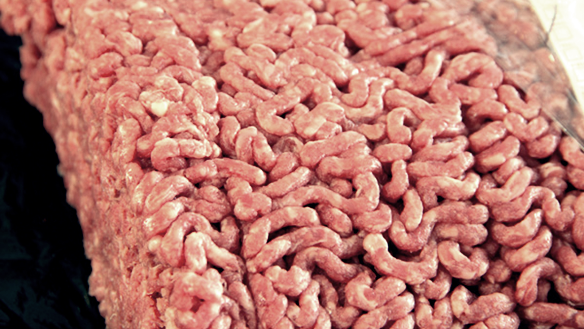 The following recipe was sent to Wellpet by Diana Carreon, R.N.,C.  It quickly became one of the most requested posts on Wellpet.  This recipe is intended for adult dogs and should not be fed to puppies.  Puppies, especially medium and large breeds, must be grown slowly and kept very lean to avoid skeletal problems (including hip dysplasia) in their adult lives.
Uses

"I take a frozen pack to dogs' shows with me, kept on ice, and never have had any trouble with it spoiling, even in the heat of Texas summers..."

"All my dogs go crazy over this stuff...but you have to be careful, it will put weight on the dogs pretty fast if you feed enough....I feed a pack a day...half in am , half in pm."

"When I want to increase the weight on a dog, I feed more; so far I haven't got to the point where they won't eat anymore, and believe me, Satin has eaten a lot at one setting. It will put on the weight, make the coats soft and blue black (on black dogs at least, that's all I have)."

"The dogs stop all the itching and chewing at their coats/skin, their eyes get this bright look and the energy level goes out the roof (not that Belgians need any more energy)."

"The bitch that I got this recipe for is a picky eater, but when she in on the food (I long ago stopped trying to "bury" it the other food; they just hunt it down to eat first, and making a mess trying) she eats much better. It seems to whet her appetite."

Per the information received after having the Satin Balls recipe checked by several vets/labs:

Satin Balls is a total canine diet. It can be feed by itself or as a supplement, for however long you wish. My dogs have been on Satin Balls for over a year; the only time that I have fed it alone is when I had a sick dog needing to be built up or an underweight dog that I plan on showing.
Just don't try to hide it in the kibble...they will make a mess throwing out the kibble, digging for the Satin Balls!  My dogs have never gotten sick on Satin balls...not even when I am at a show and feed only that. I feed less kibble, so I save money there. There is also less stool to pick up as the dogs are able to digest all of the Satin Balls.

I have been playing with the recipe. I now use the Knox Joint Gelatin instead of the plain Knox unflavored gelatin.  Since this is high in Vitamin C and protein, and is good for the joints, it would be good for the dogs. They don't seem to mind the added flavor.

I am also adding Flaxseed oil.  They probably don't need the added oil, but so far I have not seen it hurt anything.